Below find all the casting calls and roles posted on this site by casting directors/producers, that are currently accepting submissions from Orlando area actors/models/talent.

The UCF India Film Lab is currently conducting an open call for an actor or actress (aged eighteen and over) to participate in a narrative research project set to be filmed on location in Goa, India in May 2020. The role would be for a co-lead in for a as yet untitled (Goa Project is our working title) feature film. Our project will require cast members to participate in improvisational character development workshops prior to production.

Rehearsal sessions will be held from mid-February to the end of April and will require a minimum of two hour meetings three times a week. Primary production shooting will be scheduled during the first three weeks of May and will be conducted entirely on location in Goa, India. Although this is an unpaid role, all expenses for round-trip travel, in-country transportation, and lodging will be covered by the production.

This project employs a method refined by director Milos Ajdinovic called constructional improvisation. We do not have any specific casting demand for our call and are relatively open-ended in terms of the type of actor he is willing to cast. Essentially we are looking for an actor with previous improvisational training, who also has worked on professional or semi-professional feature or television productions.

Filming in India will be quite physically demanding, so we would also need an actor or actress who could meet the demands of an extensive three-week shoot on location in 90+ degree heat and in a foreign environment. The key thing that our production would need is someone who is professional and able to meet the demands of the shoot.

The core concept is that sometimes we procrastinate instead of preparing – we are our own worst enemy and who knows that better than our selves.

TV watching Procrastinator and his Conscience

Project: How We Met

Did you meet your love in an incredible way?

Do you know someone who's love story deserves to be told?

Is your story one for the ages?? We want to tell it!

Produced By Family Films Productions
We are in the early planning stages of a new live event stage show geared towards families some for adults as well. The show would consist of stories and songs with a young Elvis impersonator along the way he meets a young Dorothy as Judy Garland impersonator. "Dorothy" shares the story of the Wizard of Oz on stage and interacts with the audiences as Elvis asks questions throughout the show. By the end of the event there is a question and answer time with Elvis, Dorothy with a Oz trivia game conducted with myself and the Dorothy impersonator in conjunction with the audience. This is a fun-filled stage show for the whole family.

Film focused on a baseball team

Project: Night of The Vermin

An upcoming Horror/ Comedy feature is looking for role of:

- KALEIGH: Female - Mid 20s (Caucasian) – Attractive & feminine. The annoying girl in high school who was very popular but not bright with her decisions.

We perform interactive and fun 45-minute science programs for kids and their families.

World renowned 'presence' guru will give a boost to a person's perception and presence, and will solve an issue or make an improvement in an upbeat positive way. She is an expert in all things, etiquette, fashion, expected, civilized, business savvy, etc., and she will address an individual in each episode who can use a boost to be a better presented, respected, and influential person.

Casting for the Tina Turner Tribute Show, which will tell the story of the iconic Tina Turner with music & acting.

BLACK FRIDAY is the name of this horror video-shoot. It is a small cast about the macabre and the penalties of dealing with the occult. This is a paying project offer with the final video product being available through direct-sale and online streaming through select online pay-per-view outlets. This is rated-R due to evil themes, language and an occult imagery. There is no nudity nor graphic blood. This is a short that will be shot over two-days with a total shooting time of 8 hours. What's required are actors who can understand blocking and be able to know their own work schedule so the two-day shooting works within their schedule.

BLACK FRIDAY is the name of this horror video-shoot. It is a small cast about the macabre and the penalties of dealing with the occult. This is a paying project offer with the final video product being available through direct-sale and online streaming through select online pay-per-view outlets. This is rated-R due to evil themes, language and an occult imagery. There is no nudity nor graphic blood. This is a short that will be shot over two-days with a total shooting time of 8 hours.

PAID & Non-Union - We're currently casting MTV's hit tv series "Ghosted: Love Gone Missing"!
Have you been ghosted by someone you love and desperately need answers?
Have you ghosted someone and are finally ready to come clean and explain why you disappeared?
Sharp Entertainment and MTV are now casting people 18-39, NATIONWIDE, who are ready to find or give answers, and share their story with the world.
Please send pictures, contact info & a short description of the ghosting in your life ASAP

Project: Documentary Casting Families Who Want to Add a Puppy

NOW CASTING people from around the world who are enthusiastic and devoted to making a puppy a member of their family for a new and truly groundbreaking documentary. (Prefer first-time dog owners, but open to ALL stories)

This is a once-in-a-lifetime opportunity to participate in something that has never been done before ... a documentary that chronicles the first year of puppyhood and years to follow. Cameras will be there to witness all the triumphs, challenges, love, bonding, and growth of a puppy in its first years.

NOW CASTING NATIONWIDE for KIDS and their talented and/or funny pets! 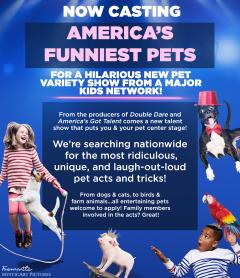 From the producers of America's Got Talent and Double Dare comes an all new pet variety show - America's Funniest Pets!
We're searching America for the most ridiculous, unique and laugh-out-loud pet acts and tricks!

In a Dystopian near future, Agency Officers granted extraordinary powers to curb violence, drugs, and illegal refugees face off with a small band of teens led by our 16 year old Protagonist fighting for their very existence.

Casting season 5 of ABC's "The $100,000 Pyramid." We are looking for smart, witty, dynamic, and energetic people with a competitive drive! On the show, contestants team up with celebrities and put their word association skills to the test for a chance to win big money and prizes.

An American travels to Thailand to rescue his daughter from a doomsday cult.

See the current projects on our other sites